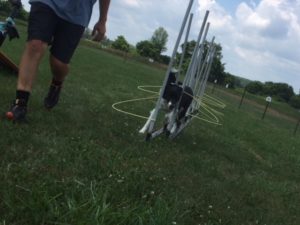 In my last post I said I was ready to put a command to the weaves.  I held off doing that and I am glad I did because this time there was a bit of regression!  This happens.  What I did was close them a bit more.  There is about an inch and a half of space in between.  The next step would be to have them closed.  Listo wasn’t ready. (ironic because one translation of his name is ready.)  He would skip under the wires and pop out.  This is due to the new pressures of the poles and the dog feels inclined to get relief from that pressure.  I worked with him to help him stay in the poles.  This slowed him down measurably.  Not what I want.  But he had been struggling and he needed a reward and I needed him to learn that his job was to find a way.  I only did one repetition in this manner.  He got his reward. Then I opened them back up to where they were last time.  This allowed him to find his rhythm and stay in the poles.  Did a couple of repetitions and made sure he worked on both sides of my body.  Once we completed this we were done.

His weave command will have to wait until he can show me that he can stay in the poles with some speed.  That said he is focused on the poles and this is a good sign!